Initially work was carried out in rented premises Nurmes Reindeer Village, where the company soon moved to its own premises in Nurmes Hyvärilä. The first non-family employees were hired. 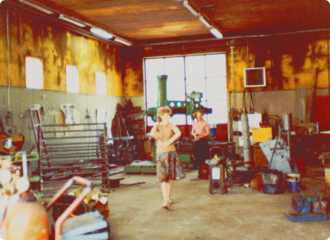 In 1984, the company received the Nurmes Entrepreneur of the Year Award and the same year Martti began Kähkösen and “The Nun’s Oven-Jussi” extensive and fruitful cooperation. Since then, the oven plants have been designed and built with a number of stone machinery and good cooperation continues.

After father Martti’s retirement, the company continues with members of the family, Vuokko and the boys Mika and Marko. In addition to the family there are twelve employees, all skilled professionals in their work.

Over time, the business has expanded from the original repair, welding and lathe machining to extensive subcontracting work in both domestic and abroad, supplying core saws.

In 1989, Nurmes Machining and Supplies Ltd received a Nurmes prize. The company has been rated AAA by credit rating since 2005.

Also connected to the facility is an office equipment and spare parts shop that has its own important role in the company’s operations.